Part of the History of Scotland

The present hotel lies at the important junction of two major road and rail routes crossing the mountainous district of Breadalbane ("The Uplands of Scotland"); of course, these routes follow the natural terrain and are of very ancient origin. In pre-Reformation days, religious communities will have provided some limited hospitality for the few travellers through these parts, as is recorded in connection with the ancient foundation at Strathfillan. In more recent times, as the country became more settled, trade developed and inns arose to serve the needs of the drovers, packmen and other travellers.

The original inn lay some 500 metres to the west of the present site, at the foot of Bogle Glen, where the north/south trackway through Glen Falloch made a junction with the important east-west route through Glen Dochart. There are stories that link it to a local hero of the 17th century, Rob Roy Macgregor, as recorded by an unknown author in "Strath Fillan and Glen Dochart in Bygone Days".

". one Buchanan, a lawyer, who held a mortgage on the lands of Rob's nephew Glengyle, was detained for two days a prisoner in the old Inn at Crianlarich, until his messenger returned with the document, the destruction of which was the price of the lawyer's release. The same spot was the scene of a better known incident, when Graham of Killearn surprised Rob sleeping in the Inn whilst twenty of his followers were resting in the outhouses. "Directing a number of his men to close and guard the gates of the barn where the Macgregors lay, he advanced towards the door of the Inn, and summoned Rob Roy to surrender... The door of the Inn was narrow, and would not admit of the entrance of more than one soldier at a time, and Macgregor, by the exercise of that agility and strength which made him famous, felled each intruder to the ground as he entered, filling up the doorway with their bleeding and insensible forms." Five of them had fallen when the door of the barn was burst open, and the party of Macgregors made good their retreat down Glen Falloch." 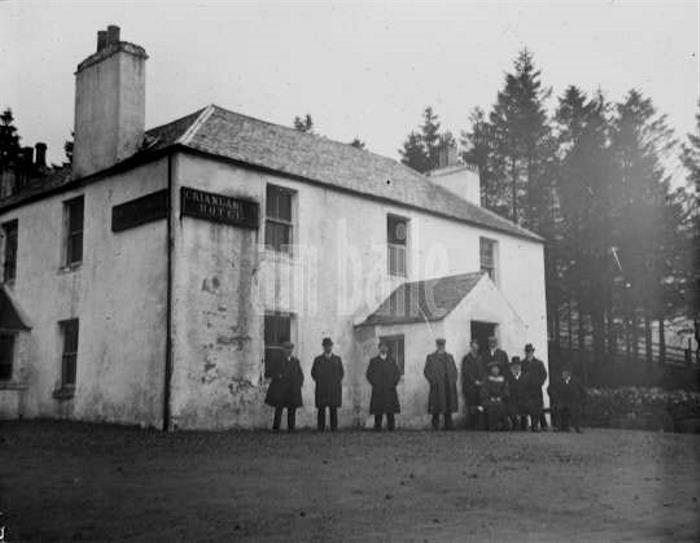 Then, as now: The ideal base for your Holiday in Scotland

The old inn survived into quite modern times, until the fashions, prosperity and technical advances of the Victorian era led to the taming of the Highlands. Military roads and bridges had been constructed in the late 18th century to subdue the Jacobite interest, and these had been supplemented by official inns or "King's Houses" in key strategic locations; elsewhere, the traditional establishments continued to meet commercial needs. In fullness of time, the track through Glen Bogle fell into disuse and the present hotel arose, beside the modern highway. It was of a simple foursquare appearance and its groundfloor comprises the present bar-lounge; initially, it was heavily reliant upon sporting parties, but the age of steam lay close at hand.

A very early view of The Crianlarich Hotel, in the archives of Am Baile »

The Age of Steam

It was a portentous day when, on 8 July 1865, the Callander & Oban Railway Act was passed by Parliament. The new line was opened in sections, over a number of years, and the service to Crianlarich was finally opened in August 1873. The opportunities afforded were seized upon with gusto - for example, the steamship Chancellor carried day-trippers from Glasgow and the Clydeside resorts to Arrochar at the head of Long Long and, from there, passengers were carried by coach to Crianlarich, then returned home via the connecting rail service. There were innumerable variations upon the theme, one of which was advertised as follows:

Mountain Climbing and Fishing
Joseph Stewart, Hotel Keeper, Crianlarich, begs to inform the public return tickets are now issued at single fare from Glasgow and other stations to Crianlarich, and that he has arranged for a guide conducting the excursionists to the top of Ben More, 3,843 feet high, on arrival of the first train from the South, and that he has also arranged to have boats in readiness for parties fishing on Loch Dochart.

Clearly, Joseph Stewart was a go-ahead man; he had been born at Dull in Perthshire about 1830 and by 1881 appears in the census as "Hotel Keeper & Farmer", together with his wife Elizabeth from Blair Athole. By 1891 they had two young sons, Robert and Alexander, and although by 1901 Joseph was a widower he lived to a great age; in addition to the Crianlarich Hotel his family also operated an imposing establishment at Tyndrum. It seems however that the ownership of both properties was vested in Edward Place, of Glen Dochart, who had something of a stranglehold upon development locally. Edward Place, of Skelton Grange, Yorkshire, had purchased Lochdochart estate (a part of the ancient lands of MacNab) at some point in the early 19th century (pre. 1823), and subsequently the family obtained Crianlarich as well. They did not impede construction of the Callander & Oban railway, but difficulties arose a little later, when the new West Highland Railway was constructed. This new line, connecting Glasgow directly with Fort William, was opened in August 1894, and had its own station (still in use).

A wrangle arose because the promoters of the new railway wished to incorporate a substantial and well-appointed Dining Room for the travelling public, something which the current Edward Place was anxious to oppose. A junction between the two railways had encroached upon his land, and Place blocked its use for almost four years until agreement was reached and less imposing facilities were provided. Nonetheless, these privately-owned refreshment rooms soon became famous in their own right: "Here originated the celebrated breakfast and luncheon baskets which were supplied to passengers during the Crianlarich stop. The Crianlarich basket became an institution. Some of the travellers took their baskets to the seclusion of their compartments, but others preferred to explore its mysteries in the open air. Many a passenger who had entrained the previous night in London enjoyed his first Scottish breakfast sitting on a platform seat at Crianlarich, his appetite whetted by the pure, crisp air of a Perthshire morning.. The arrival of the trains was greeted with enthusiasm by the Crianlarich hens. The sound of an approaching train was the signal for every fowl in the railway cottage gardens to go squawking and clucking over the rails, oblivious of the danger of churning wheels, to solicit crumbs from the open-air diners." (J. Thomas 1965).

To this day, Crianlarich Hotel welcomes passengers who come by train. Such travel is friendly to the environment, providing easy access from the major cities, and there is an excellent overnight sleeper service to and from London.

The glory days of motoring

The energetic proprietor of the Crianlarich Hotel was quick to respond to every opportunity, and by 1910 was already providing facilities for the motorist - his hotel was "Headquarters of Automobile Club", providing both garaging and petrol for its guests. Describing Crianlarich as the "Scottish Mountaineering Centre", Joseph Stewart offered excellent fishing for both brown trout and salmon and also a "Splendid 9-hole Golf Course in connection with Hotel, laid out by Fernie,Troon."

Although the earliest days of motor-touring were sadly interrupted by the onset of the Great War the seeds had been sown and, even as the dust settled, "The Dunlop Book - The Motorist's Guide, Counsellor and Friend" made its appearance ("Price - Two Guineas"). This comprehensive volume was a matchless precursor to the modern equivalent, and laid the whole of Britain before a waiting public. "Mr. Dunlop hopes to prove that despite hoary locks coincident with his ripe experience, the one who gave birth to the primary comfort of road travel can contribute further to the charm of motoring." Even in this early work, we find Crianlarich Hotel is listed and approved by both the RAC and the AA, although the village is rather inadequately described as "Isolated junction of roads and railways among the mountains on the Glasgow and Oban route, adjoining Loch Dochart".

In the years between the wars, the touring trade was augmented by the growth in popularity of the charabanc and Crianlarich Hotel was extended to meet demand, to the designs of Alasdair Marshall McMichael A.R.I.B.A.(1888 - 1955). Naturally, the restrictions and difficulties of World War II put a temporary end to tourism as such, but doubtless the hotel continued to provide such services as circumstances would demand.

The post-war years saw a huge growth in national prosperity, accompanied by a baby-boom and widespread access to leisure-time. Many people obtained their first private motor-car, whilst others began to appreciate the benefits and economies of touring holidays by motor-coach. Larger hotels began to adapt to accommodate both types of visitor and in the late 1970's the Crianlarich Hotel was acquired as his first hotel by Ian Cleaver, who decided to devote most of his energies to inclusive touring holidays; under his ownership, the premises were extended and thoroughly modernised. In due course however, his highly successful operation expanded to encompass a number of specialist hotels and outgrew these original premises.

Nowadays, with only 36 rooms, Best Western The Crianlarich Hotel is a comparatively small hotel and has reverted to its earlier role, one in which it welcomes all comers. A warm welcome is afforded to mountaineers and munro-baggers, to walkers and fishermen, to railway-buffs, motorists, persons travelling on business, touring motorists and - of course - organised parties. If you would like more information on the history or for anything else, please just contact us and we will be pleased to help.